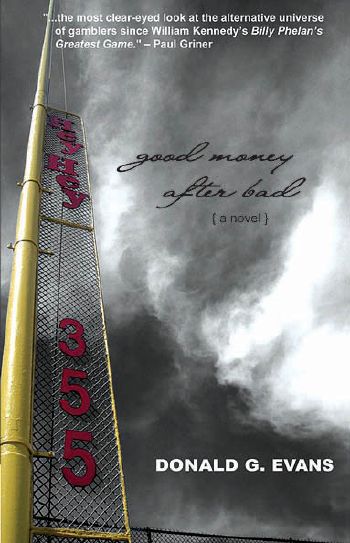 When we meet Chance Skinner, his luck has taken a turn for the worse: he owes money to several angry bookies, the woman he thinks he loves is about to marry someone else, and the grandmother he lives with is growing frailer by the day. But, a true gambler, he's sure it won't always be so bad, partly because he's met a new woman—Gwen—and partly because he's got plans to make big money. Until that happens, Chance is content to scrape up cash by enrolling in a few drug studies. Yet luck is quirky, and at his first drug study he hooks up with the ominous Phase One, a one-eyed drug-study veteran who hints darkly at much bigger money if Chance is willing to take much bigger risks. Will they be worth it? They certainly are for the reader.

Praise for Good Money After Bad

Don Evans's Good Money After Bad is thoroughly enjoyable, the most clear-eyed look at the alternative universe of gamblers since William Kennedy's Billy Phelan's Greatest Game. Chance is both self-aware and self-deluding, with a much sharper eye for others' foibles than his own. He also has a peculiar but highly developed sense of ethics, which we see tested as he becomes enmeshed with a finely drawn group of friends and lovers, including Phase One, Gwen, his secret flame Sophie, his Uncle Bud (the world's worst gambler), and Old Man Gurnsey, a friend of Chance's dead father, the bookie to whom he owes too much money, and the man who wants to save him. Finding out whether or not he can is a terrific ride."

—Paul Griner, author of the novel Collectors and the story collection Follow Me

Good Money After Bad is a work of subtlety, humor and compassion. Don Evans' novel of the inner workings of Chicago's gambling community shows an inside knowledge of this nether world, forcing us to accept, as his characters do, the extraordinary depths to which we can all sink when life revolves around a game of chance. Good Money After Bad welcomes a new and important voice to the literary world.

—Paul Watkins, author of The Story of My Disappearance

In lean muscular prose author Donald G. Evans explains the insidious drag of gambling and the way our hero's past wounds and present dreams lead him into a swirl of chaos that can't be sustained...the stuff of great psychological drama.

—Rick Telander, author of Heaven is a Playground

Pushcart Prize-nominated author Donald G. Evans presents Good Money After Bad, a novel set in the Chicago heat-wave summer of 1995. Sports gambler Chance Skinner has plunged so deeply into debt that his one hope of keeping a good credit standing is to volunteer as a guinea pig for medical studies. The charismatic human parts broker Phase One Fenwick seems to have all the answers to Chance's dilemma, but can he be trusted? An involving novel about being confronted, once and for all, with the question of how one wants to live—and what price, whether in money or flesh, one is willing to pay for that lifestyle. Highly recommended.

With a gambler named Chance as the protagonist in his roguishly witty debut novel, former Chicago Sun-Times sports reporter Evans places some high-stakes bets and comes out way ahead. Chance cuts quite a figure in his vintage fedoras and fancy duds, but luscious and brash Gwen isn't thrilled to discover that he shares his digs, an apartment within earshot of Wrigley Field, with his grandmother. Not that flashy, flask-packing Gram isn't good company. What Gwen doesn't know is that Chance is addicted to sports betting. With debts mounting, he gives his body to science, playing guinea pig for drug trials and sleep studies and getting tangled up with sinister one-eyed Fenwick, aka Phase One. Evans is a terrifically atmospheric writer, deftly evoking the world of bookies and compulsive gamblers, the tensions of gentrification, a surreally severe heat wave, and the consequences of secret desperation. Combining the blue-collar, neighborhood-anchored aesthetic Chicago writers are known for with a touch of suavely boozy noir, a sliver of medical-thriller action, and loads of charm, Evans tells a rascally and edgy cautionary tale.

Pushcart Prize-nominated author Donald G. Evans presents Good Money After Bad, a novel set in the Chicago heat-wave summer of 1995. Sports gambler Chance Skinner has plunged so deeply into debt that his one hope of keeping a good credit standing is to volunteer as a guinea pig for medical studies. The charismatic human parts broker Phase One Fenwick seems to have all the answers to Chance's dilemma, but can he be trusted? An involving novel about being confronted, once and for all, with the question of how one wants to live—and what price, whether in money or flesh, one is willing to pay for that lifestyle. Highly recommended.

You see a man helplessly in the grip of this compulsion of his, and yet he knows it, and that adds a layer of pathos to the character. You like him. You want him to come out ahead, one way or the other. I think it's an absolutely delightful book.

…one of the best books I’ve read in a long time. This is a real Chicago novel…a very, very knowing look at gambling and illegal bookmaking. This is some book. I loved it.

Good Money After Bad was a novel that truly surprised me. It's gritty like Algren, witty like Charles Baxter, and edgy like Denis Johnson. It's the best Chicago book I've read in a long time.

—Rus Bradford, author of Paddy on the Hardwood: A Journey in Irish Hoops

I really enjoyed Good Money After Bad. I learned more about baseball gambling from that book than everything else I'd ever read on the subject combined!

Chance! The threads so well brought together, the idea of what one will risk for what one wants. The local colour, with those same hot days my character endured. The sex delayed as he waits for the sound of a win or loss from the field across the street. Hilarious! Characters—including the down home Grandma; the unique wardrobe Chance inherits, which gives us both a sense of him and of his ancestor. I also loved the way Phase One hangs around, like the incarnation of the devil. Yikes! Hope you didn't base this on any personal experience. Losing a kidney would be dramatic.

—Mary Burns, author of The Reason for Time